You can do Cinque Terre in a day trip.

Everyone (well, everyone on the Internet) will try to dissuade you. If you’re coming from Florence it takes nearly three hours just to get there. You won’t have enough time to see the region’s true beauty, they say.

But that’s not true. Cinque Terre was the highlight of our 10-day tour of Italy, which progressed from Rome to Florence to Venice. I didn’t want to pull two days from our carefully planned itinerary for Cinque Terre. I wanted to fit it into a day’s excursion. Which we did. And here’s how.

We bought train tickets the day before in Florence. Waiting until the day before might mean we didn’t get the cheapest discounted rate, but it let us make sure that the weather would be good and that we saw enough of Florence that we didn’t mind taking a day away. Tickets from Florence to La Spezia and La Spezia to one of the five coastal hamlets aren’t very expensive. We purchased roundtrip tickets from the kiosk in Florence’s Santa Maria Novella train station.

There were multiple trains running even on a weekday, so we chose a later departure in the morning. We didn’t want to miss breakfast at the hotel, so for us, it was worth it to sleep in and have a more leisurely morning. That means that even leaving after 10 a.m. gave us plenty of time in Cinque Terre, but you could easily leave sooner to allow for a full day of sightseeing.

We easily boarded the train from Firenze S.M.N to La Spezia. We didn’t validate our tickets at first, but something clicked somewhere in my mind, some good Internet advice I’d read, so I hopped off and ran to the validation machine to punch them before the train took off. All was well, but then we made a mistake. There are two stops in La Spezia. We didn’t know this and got off on the first one. So we had to delay nearly a half hour, making small talk with another couple from California, as we waited for the next train to come and take us to La Spezia Centrale.

And we still had enough time in Cinque Terre. 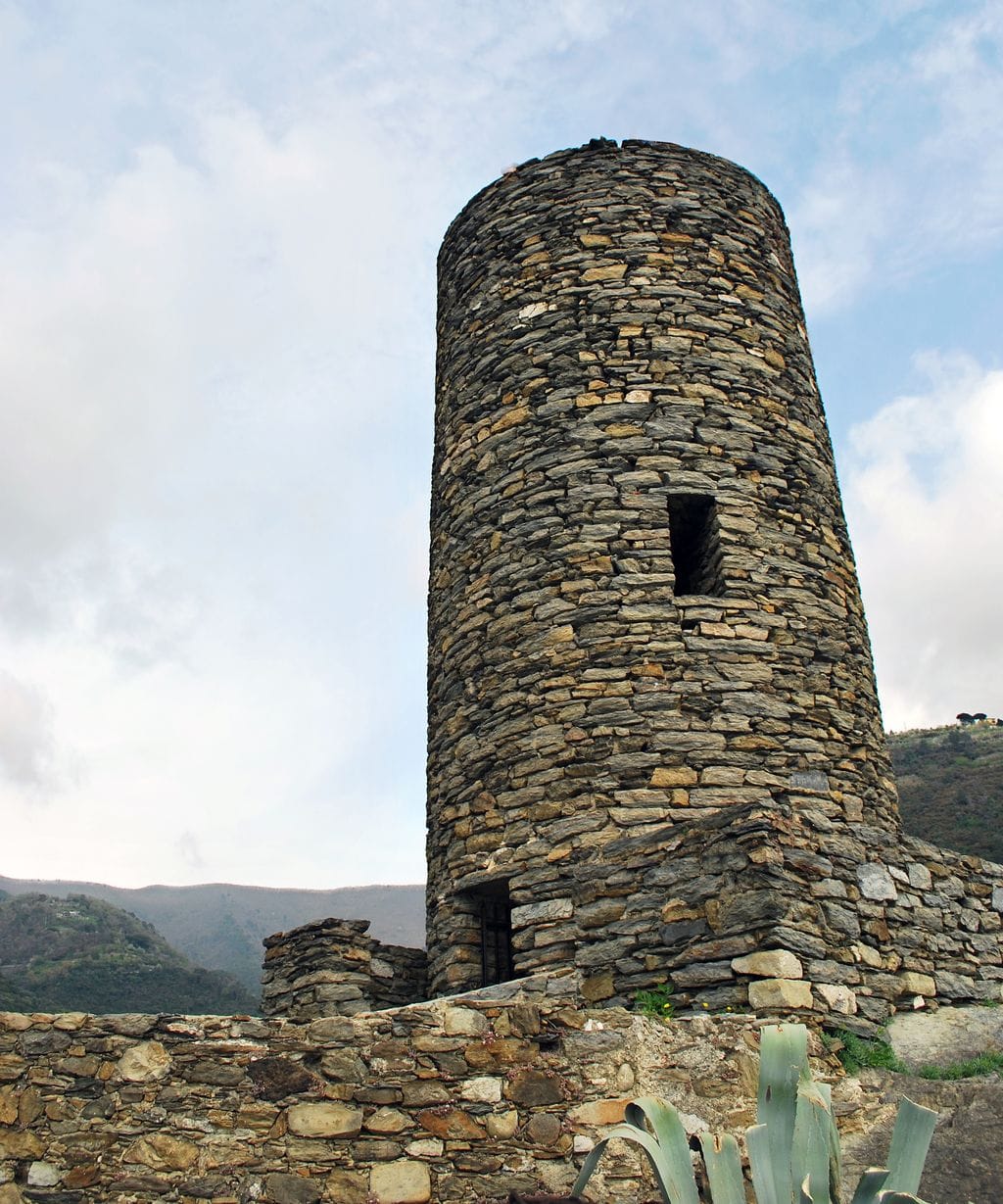 We rode the train to our furthest point, Vernazza. I had heard that this was the jewel of the “five lands” and more than anything I didn’t want to miss that classic photo. That’s where we hit another snag.

We knew the Blue Trail was closed during our trip. (In fact, as it turned out, much of Italy appeared to be under construction in April 2015.) But we weren’t sure how far along the upper coastal trail we could walk to see the view of the bay. After picking up our free map at the Vernazza train station, we walked along the start of the Blue Trail till we came to a booth where someone was checking tickets. We had opted not to buy a Cinque Terre Card which would give us access to the coastal Blue Trail since the only portion open was Vernazza to Monterosso al Mare, meaning we’d pay upwards of 15 euros to walk a few dozen feet past the booth, snap photos and walk back. The steep, winding hike along the Blue Trail from Vernazza to Monterosso al Mare takes more than two hours and that we didn’t have time for.

So I captured what I could at my current height, still with pleasant views over the sea, and instead, we climbed Doria Castle. Admission was only a few euros, but it unfolded stunning panoramas of the surrounding cliffs and sea and city. Plus, I was in a medieval castle. It was really more of a tower, an overlook. But it was a castle and it counts. 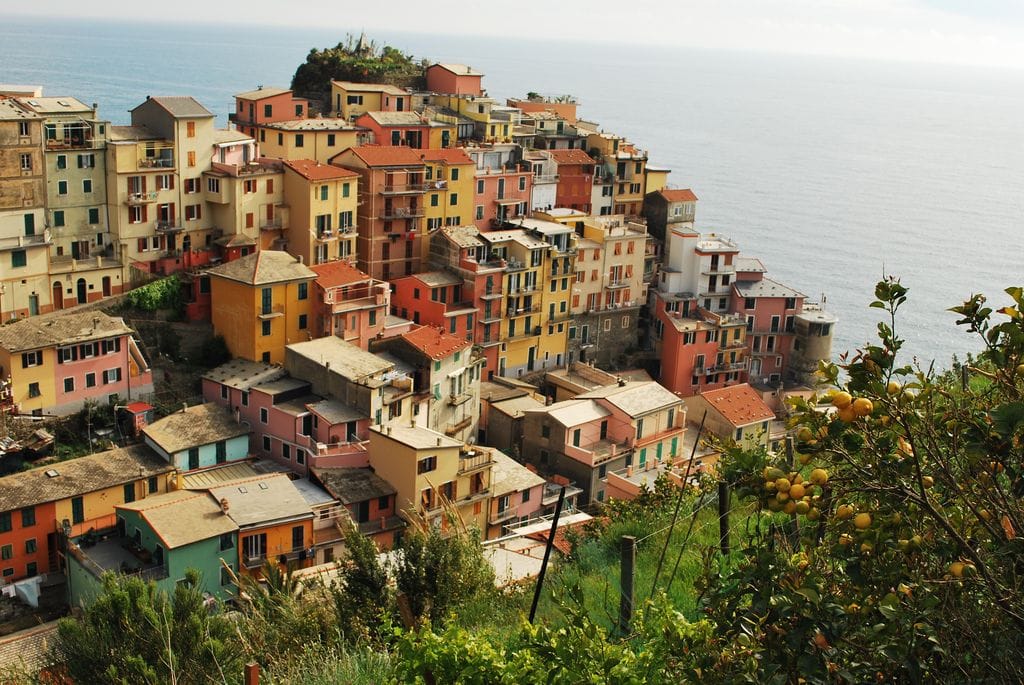 We left Monterosso al Mare, which I had heard was more beach-centric, populous and touristy completely off our trip. We decided to skip Corniglia as well. Corniglia, unlike her sisters, is not a coastal town, and we preferred to spend longer in Manarola. In terms of sheer natural beauty, Manarola is runner-up to Vernazza.

One of the most famous portions of the Blue Trail is the incredibly scenic Via dell’Amore, the 15-minute paved coastal walk along Lovers’ Lane to Riomaggiore. But for me, it’s just hearsay. We started along the path for as far as we could until we came to the area where it was blocked off due to the closure. I’m sure it’s lovely, and I think the Cinque Terre Card is worth the expense to walk the coastal Blue Trail connecting the five towns, when it’s open.

But I want to tell you about the Red Trail. It’s higher, longer and much more winding, curving in and out of vineyards and groves. It was the single most beautiful thing we saw in all of Cinque Terre, in all of Italy.

With only a few hours left before our train back, we started climbing up Manarola. That’s the only way I can describe it. We walked away from the water and the incline for the road kept increasing until we came to a trail entrance, which we took. It forked at one point, and we picked a direction based on a whim. We were tourists out of time and place, wandering along.

Eventually, hiking for several minutes, weaving among lemon trees and terraces and flowers, we reached an overlook with magnificent views of the scenery stretching below. Later I learned it was the Punta Bonfiglio from which you can walk down into a small church cemetery that has more splendid views. 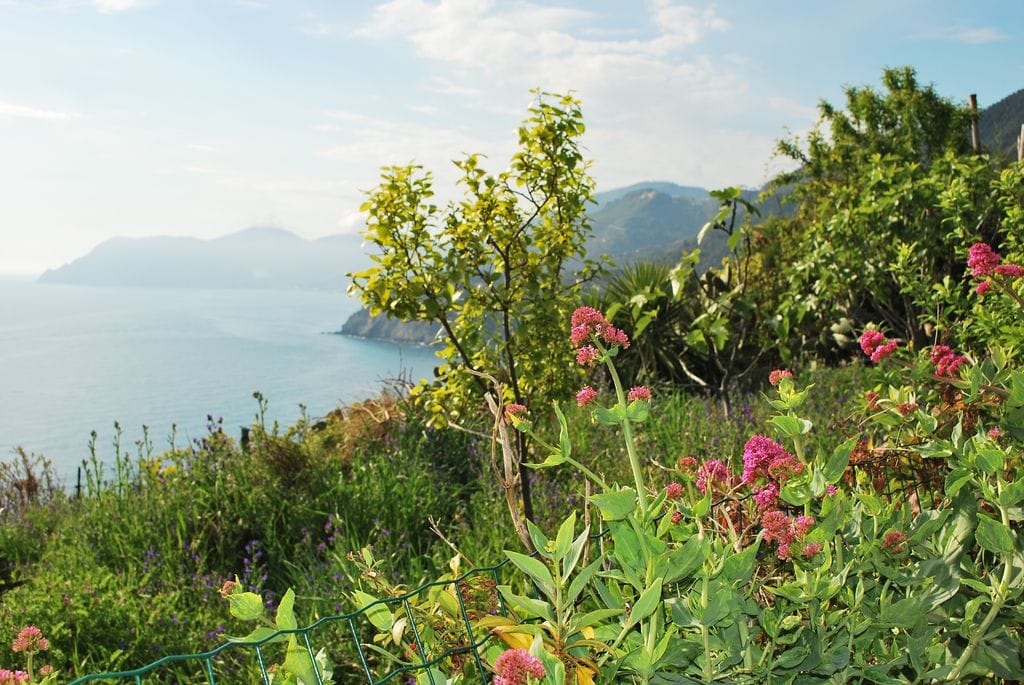 We wandered along the trail for an hour or more, staying essentially in Manarola but starting the walk up toward Corniglia just to see what waited around the bend.

I knew we wanted to buy a boat ticket for the last leg of our journey: from Manarola to Riomaggiore. We got a boat schedule from the Manarola train station and waited by the harbor to buy tickets and then board the boat. The ride was brief and I didn’t take as many photos as I wanted, but it was fun to be on the water, feel the spray and see the final coastal hamlet approaching. If you have the time, I’d suggest taking a longer ride, but it was perfect for our short excursion.

We didn’t have long in Riomaggiore. We explored the town a bit and found some delicious takeaway pasta for dinner that included seafood since that’s what they’re famous for. We boarded the train a little after 6 p.m. and were back in Florence without being exhausted and with time to enjoy a gelato and take some night shots by the river. I do wish I could have taken sunset photos in Cinque Terre, but we had booked the second-to-last train so we wouldn’t potentially miss our last ride out of town. Looking back, I would have taken the final train and just been extra careful not to miss it.

When talking about travel time, you have to remember you’re on a train not driving. You’re not exhausting yourself on endless highways, watching for your next exit. You’re leaning back on a not-too-crowded train, sorting photos, chatting, looking forward to or remembering your trip. It doesn’t really feel that long.

So all told, it was about five hours of travel and just over five hours in Cinque Terre. And I’d do it again in a heartbeat. 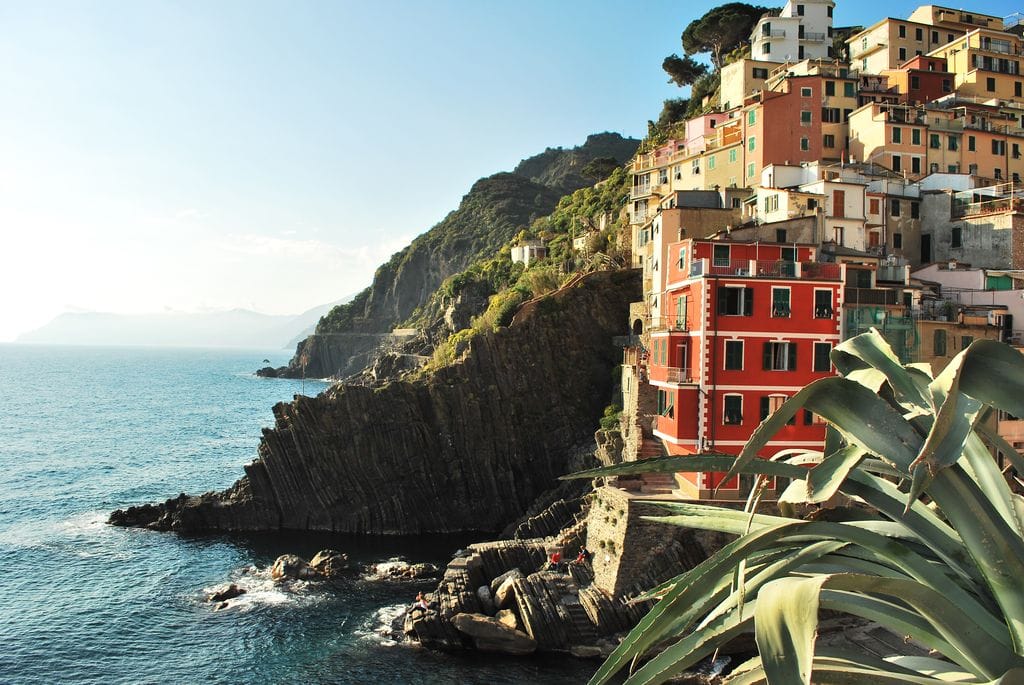